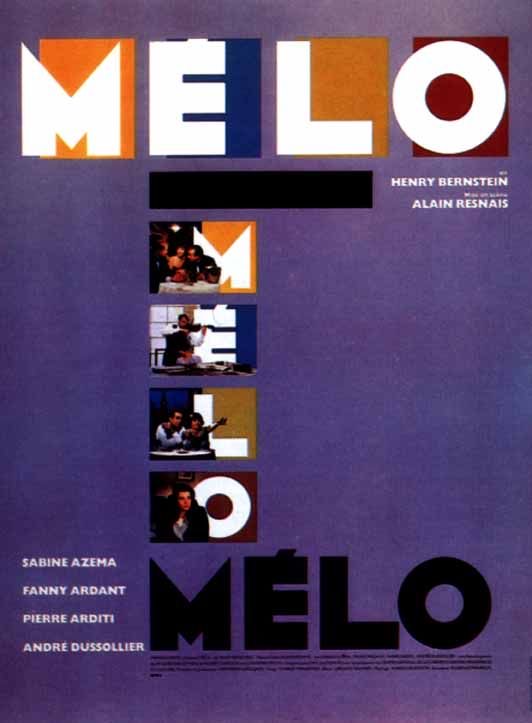 “I’ll give you a year to weep Pierrot, to cry. Thinking you’ve had a great catastrophe.

Mélo (1986) by Alain Resnais is a French romantic drama based on Henri Bernstein’s play under the same title, which was written almost sixty years earlier than the film, in 1929. Usually when one hears the name of Alain Resnais, one would instantly think of his masterpiece Hiroshima Mon Amour (1959). Naturally, when I heard that Mélo was one of Susan Sontag (one of my all-time favourite critics)’s favourite films, I was intrigued, and felt compelled to see it.

The film begins with an intimate open-air dinner taking place at “9:30 pm, in Montrouge on the outskirts of Paris”, as written on the screen. Marcel Blanc, a famous violinist begins to recall and narrate in detail to his old friend (and host for the evening) Pierre Belcroix and his wife Romaine, the story behind him losing faith in love. His vulnerability and sincerity gains Romaine’s attention. We watch her gradually, then and there, falling in love with Marcel. Needless to say, Marcel and Romaine begin a love affair right in the following scene.

Revolving around the intertwining lives of three musicians, music is an important motif throughout the film. A motif of seduction, friendship, companionship and love. Illness is another motif that clearly foreshadows the film’s ending. Moreover, the film does not offer enough characterization. Although it is shown, from the very first scene, that Pierre and Marcel are quite different from one another (Pierre being an over trusting, easy going and cheerful man, while Marcel is an over-jealous one, with tendencies towards “unhappiness”), the film makes such a point to show that “we are what we are” as Romaine puts it. Little can one do to change or to understand who one is.

On the other hand, form is highly important in this film. Adapted from a play, Mélo is almost made to look like a theatrical performance. The camera lingers, almost uncomfortably, on Marcel’s face as he recounts his memories in detail to his friends. No flashbacks nor unexpected close-ups. You wish to look away, but the camera forces you to observe Marcel’s face, as you hear his words. Dialogue is of utmost importance here.

I’ve attended quite a few scriptwriting and screenwriting workshops in my life. Often at the beginning of each workshop, instructors almost habitually start by the same question: how is cinema different from theatre (or theatre different from cinema), in an attempt to encourage us -attendees and possible future scriptwriters- to exploit the unique potential of the medium in our writing. We are urged to believe that in essence, the value of a good film comes from being an audio-visual medium. Resnais’s film, however, consciously and purposefully blurs the line between theatre and cinema. And for this particular reason, I highly recommend watching it. With a high dose of melodrama, long takes and restricted space, Resnais creates such a sweet distance between the viewer and the film, which I surprisingly enjoyed.